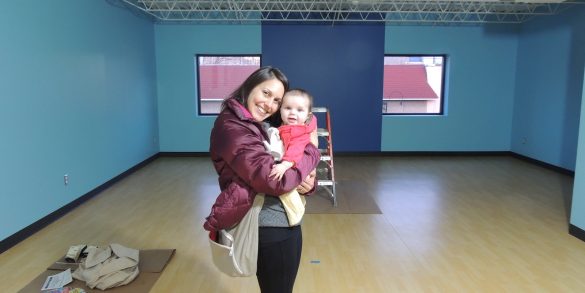 A few days before I found out I was pregnant with my daughter, I was out with a group of girlfriends from high school. Those of my friends who had entered motherhood chatted about anything and everything related to life as a mother: Sleepless nights, how hard breastfeeding was, activities their kids were involved in, childcare difficulties, etc. The rest of us—the childless ones—ordered a second round and talked about where we were going to go next after all the moms went home to their families.

Later that night, I asked my fellow non-mom friends, “What consumes your thoughts?” For my mom-friends, it was obviously their children. “Travel,” said another childless friend. “My dogs,” said another.

For me, it was yoga. I was obsessed. I had completed my first yoga teacher training, was teaching yoga and building a following, practiced about 8-10 times per week at various studios, and most of my free time was spent reading about or thinking about yoga.

Then I found out I was pregnant. Over the next year, the hard drive of my mind had to delete “yoga stuff” to make space for “mom stuff”: Formula ounces to feed per day, sleep schedules, various milestones, how much Tylenol is appropriate for a fever, when I was going to get to sleep next…

It would have been so easy to completely give up yoga. I understand now what happens when you become a mother: You have to give something up to make space for something new, and parenthood is not quite the same as taking up playing the guitar or learning Spanish. Becoming a parent COMPLETELY takes over. There’s so much to pay attention to. So much to keep track of, to plan for, to pay attention to. Especially if you’re using cloth diapers 🤦🏻‍♀️

Thankfully, I had committed to opening a yoga studio before the baby had actually come out of me 😂 so I had literally turned yoga into my job. Showing up to practice became an obligation. An accountability. A requirement. And thank GOD for that.

But even as a yoga studio owner, it’s hard for me to make the choice to show up on my mat. There are always emails to respond to, meetings that could be had, marketing to do, and so much more—all that must be done before I have to pick my daughter up from preschool.

But every time I make the choice to show up on my mat to turn inward for an hour, I get this “re-boot” of my hard drive that makes me feel like myself again; alive again. Like I don’t just live to serve my 5-year old daughter. Like I’m a strong, capable, independent woman, who is a powerful role model for her little girl and step-daughter.

My family benefits most from me if my cup is full. And I have to make the choice every day to keep that cup full, to clear out the junk on the hard drive.

If you are a mother, I get that it’s easy to get depleted. Do you let your family drink from your cup without refilling it? What would be possible for your family if you took the time for yourself to refuel and reboot?

Treat yourself and the other mothers in your life to one of our deepest discounted gift card specials: 5 classes for $50.